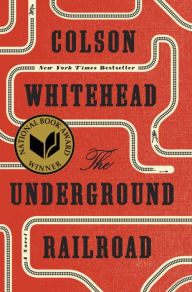 Winner of the Pulitzer Prize and the National Book Award, the #1 New York Times bestseller from Colson Whitehead, a magnificent tour de force chronicling a young slave's adventures as she makes a desperate bid for freedom in the antebellum South.

Cora is a slave on a cotton plantation in Georgia. Life is hell for all the slaves, but especially bad for Cora; an outcast even among her fellow Africans, she is coming into womanhood—where even greater pain awaits. When Caesar, a recent arrival from Virginia, tells her about the Underground Railroad, they decide to take a terrifying risk and escape. Matters do not go as planned—Cora kills a young white boy who tries to capture her. Though they manage to find a station and head north, they are being hunted.

In Whitehead’s ingenious conception, the Underground Railroad is no mere metaphor—engineers and conductors operate a secret network of tracks and tunnels beneath the Southern soil. Cora and Caesar’s first stop is South Carolina, in a city that initially seems like a haven. But the city’s placid surface masks an insidious scheme designed for its black denizens. And even worse: Ridgeway, the relentless slave catcher, is close on their heels. Forced to flee again, Cora embarks on a harrowing flight, state by state, seeking true freedom.

An odd blend of historical fiction and fantasy, Colson Whitehead's vision of a literal underground railroad dug by unknown hands to carry runaway slaves to freedom is both inventive and troubling. On one hand, the tale of Cora who escapes slavery under the hands of a sadistic master only to be forever tracked by a ruthless slave catcher kept me turning pages. Cora embodies so much of the slavery narrative, and reminds us of America's shameful past. (Which seems to be Whitehead's true purpose, to point a damning finger at white America.) Cora's story is reminiscent of other historical novels on the same topic: Beloved by Toni Morrison, Roots by Alex Haley, Chains by Laurie Halse Anderson--though it did not, in my opinion, achieve the level of emotional connection of its predecessors.

On the other hand, The Underground Railroad left me feeling both unsatisfied and concerned. I never grasped why the author chose to create a literal underground railroad. I get that the term is, in actuality, a metaphor. And Whitehead probably asked himself, what if it was real? Then set out to write a book about it. Only the railroad itself doesn't play a hugely significant role in the story. It's just there, a convenient mode of escape for her at times throughout the story. While I in no way would criticize Whitehead as an author (he has an impressive list of titles and awards behind him), I failed to see how a literal railroad made this story any better than if Cora's story had been more faithful to actual history.

Another issue I had was that at times the author's language and choice of vocabulary seemed forced. A little too intentionally poetic. It got in the way of the story, but not enough for me to dislike the book. It just made it a little more challenging stay "in" the story.

Finally, what really concerned me the most was the thread of anti-American and anti-white sentiments woven throughout and at times boldly stated. For example, "And America, too, is a delusion, the grandest one of all. The white race believes--believes with all its heart--that it is their right to take the land. To kill indians. Make war. Enslave their brothers. This nation shouldn't exist, if there is any justice in the world, for its foundations are murder, theft, and cruelty. Yet here we are" (285).

And "She'd watched the faces in the park in North Carolina during the daytime, and at night when they gathered for atrocities. Round white faces like an endless field of cotton bolls, all the same material" (277).

And "The Great War had always been between the white and the black. It always would be" (288).

As a white person reading this more than 150 years after the start of the Civil War, in a time when black Americans have more freedom and prosperity available to them than ever before and yet still struggle for complete equality, in a time when hostility between black and white is increasing when it should be decreasing, I can't help but ask if The Underground Railroad intends to enlighten us, or to incite more hatred between the races. I recognize this is a precarious question to ask. I cannot ever claim to understand what it means to be the descendant of slaves, or the recipient of racial discrimination. Whitehead, as a black man, has every right to this narrative, not only as a creative author, but also because of his heritage.

However, it is one thing to tell a story, and quite another to stir up more anger, more hatred. I suspect that is why this book received the awards it did--not necessarily because the book is better than any other book, but because of the timeliness of its message.

The dual nature of The Underground Railroad--as a story and as an overt political statement--is what makes this book complicated. I liked it, but I also am wary of it.