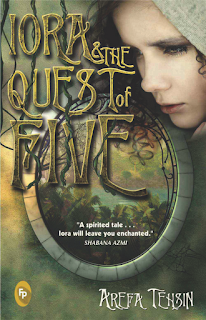 WHAT IS THE MYSTERIOUS FIVE?
That’s the question that little Iora, a resident of Twitterland, a hidden rainforest civilisation, must answer in order to save her father’s life. Searching for him, she enters the Wacky Wilderness—an enchanted jungle—where she learns that it is not just her father’s life that’s threatened. The entire jungle is doomed! And thus begins Iora’s incredible adventure with dwarf Beetle and her bosom foe Owlus, and together, the three encounter many tribes, clans and creatures of the wild!
But as they carry on this mad and marvellous expedition, little do they know that destiny has an evil surprise in store for them . . .

I received an email about this book and was instantly intrigued. The cover, first off, is beautiful. The story is unique. And I was drawn to the fact that the author is from India. The author was kind enough to provide an interview and an excerpt from her book. To purchase it, you need to go here:  http://www.uread.com/book/iora-quest-five-arefa-tehsin/9788172344160


Describe Iora & the Quest of Five in one sentence.

This fantasy novel set in a rainforest is a pacey story of quest, adventure, determination, spirit and magic, not just of the enchanted, but also of finding friendship and following dreams. 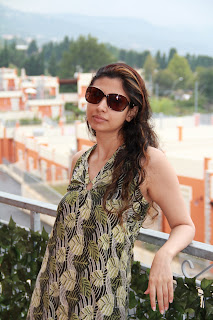 I understand you are from India. Does Indian culture and/or mythology play a role in the story?

Not much. The setting of the book is a rainforest, which is an amalgamation of all rainforests of the world. I’ve tried to be true to the rainforest characteristics and wildlife. Characters such as Iora, Kookaburra, Hoatzin etc. are named after rainforest birds, Ghosts of Yellow Leaves, Head Hunters etc. are actual rainforest tribes, Agogwes, tatzulwurms, all women warrior tribe Amazons are actual rainforest legends.

What inspired you to write this book?

My husband Aditya was pestering me for long to take my writing more seriously. I was reading The Book of Great Jungles then, and the idea of a hidden rainforest civilisation struck me. I began to scribble down the story on rough pages of the office and completed the book in two months.

What were some of your favorite stories as a child and how have they influenced you as a writer?

My favourite stories as a child were the ones that my father narrated to me at bedtime. Some stories he had made himself like Dirghu aur Richu – two bear brothers. Others were Russian stories like Baba Yaga. Their influence on me as a writer I suppose is that most of my stories are based in jungles.

The road to publication was a bumpy ride. There were downright rejections, suggestions to improve and long waits. This helped me to make the story better until I finally found the editor who totally loved the book. It was a wonderful learning experience for me. One thing that I thankfully didn’t do during this process was stop writing. When I got my first publisher, I already had other books ready to roll on the roll press.

A lot more stories… I’ve already finished writing the third novel of Iora series. My books releasing next year are – Land of the Setting Sun - wildlife stories for children co-authored with my father Dr. Raza Tehsin, Giant One Feathered Elephant Bird – a picture book, & Steed of Jungle God – a collection of my father’s intriguing jungle experiences

An excerpt from the book – Iora & the Quest of Five

With a soft hum, the entrance opened and the jungle stretched before her, much darker than Twitterland. She removed the camouflage coverlet and stepped into the forest. The nightwalkers were out to forage for food on their set highways. Voices of the jungle meshed into the fabric of the night–a little quivering sound from near, a harsh yell from afar. Familiar with the surrounding jungle, Iora reached the bank of the Scar-faced River, where she’d seen the non-jungle dwellers. Her eyes slowly adjusted to the dim light that filtered in through the thick foliage above her.

“Excuse me, can anyone tell me the way to the Silver Lake?” she asked a group of deer, grazing a little
away from the river. All the animals stopped what they were doing and lifted their heads to look at her. No one answered, an alert and watchful look on their faces. She was about to ask again when she was swept off her feet. She caught a glimpse of a dark figure jumping on the spot where she had just stood. It was a panther! It growled on missing its prey and the other animals fled at its sight.

Iora realised she was high above the ground on a big, flat branch with a strange-looking man by her
side. A thin film of stretchable skin connected his forearms and legs forming membranous wings.
“Thank you very much for rescuing me. But I don’t think I know who you . . .”
“He is my friend, Bara,” came a voice from another branch.
“Beetle!”
“Hoo! I am glad I didn’t come late this time for a change!” smiled Beetle, wiping sweat off his forehead.
“What would I ever say to Heron if I let you go alone? The jungle is not as friendly as Twitterland. For
herbivores you are a hunter and for carnivores a prey. Hardly any tree can speak or even understand Jungly. And, ah well, I do know a thing or two about the Wacky Wilderness.”
“Thank you so much, Beetle!”
“Nah, it’s nothing. Let’s start for the Silver Lake now. Bara will guide us to the foot of one of the five
hills.
“I’ll need to go home and inform my family first,” Bara said in a chirpy voice.
“Where is your home?” asked Iora.
“We’ll reach there by dawn,” said Bara, spreading his arms and flying further up from the platform towards the treetops. Beetle and Iora began climbing after him, meeting various animals in the many layers of the giant rainforest trees.