THE MAGIC IS IN YOU 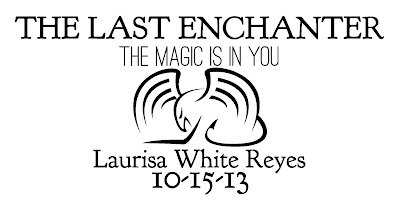 
That is the theme I've used to promote THE ROCK OF IVANORE since its release in 2012. It's how I connect with the students at all the schools I visit, encouraging them to live their dreams and to never give up.

Now that book 2, THE LAST ENCHANTER, is coming out in October I need a new theme, something that not only captures the spirit of the book's protagonist, Marcus, who has discovered some amazing things about himself, but also will continue to inspire young readers to reach for the stars.

So I'm christening my new theme:


THE MAGIC IS IN YOU


When I do my school assemblies, I talk about how I always dreamed of being a writer, but the reason why it took so long for me to get around to doing it is that I didn't believe I could. I didn't think I had it in me to be a an author, and maybe I didn't at first. But I worked hard at developing my talents and overcame many obstacles to finally achieve my goals. I bring with me a big tote bag and then I ask the kids what tools magicians need to do magic. I always get the same answers, and I'm prepared for them.

And I pull each item out my bag. Then I explain that in my book, Marcus doesn't use any of these things to do magic. Instead, he uses a gift given to him by his teacher: a key. Just an ordinary key. But then I tell the kids that they don't need any of those tools either, and they don't even need a key. Everything they need to do magic is inside of them. Once they find that special something, which is nothing more than believing in themselves and the willingness to do whatever it takes to succeed and never quit, then they can do anything.  That is magic.

Several months ago I presented this to the 5th grade at Sunland Elementary in California, which just happens to be the school I attended as a child. A few weeks letter I received a stack of thank you notes in the mail from the students. One in particular really touched my heart. It was from a girl who had played in her school's basketball game later that day. She missed shot after shot and started to get discouraged. But then she remembered what I had told her, to never give up. She tried once more, made the shot, and won the game. That is one child I know will live her dreams.

So, when things get difficult for you as they will for all of from time to time, remember that the magic is in you, and keep on going.
Posted by Laurisa White Reyes at 12:00 AM