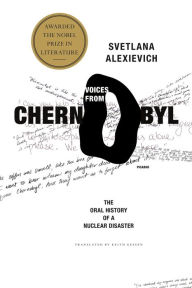 Winner of the Nobel Prize in Literature

On April 26, 1986, the worst nuclear reactor accident in history occurred in Chernobyl and contaminated as much as three quarters of Europe. Voices from Chernobyl is the first book to present personal accounts of the tragedy. Journalist Svetlana Alexievich interviewed hundreds of people affected by the meltdown---from innocent citizens to firefighters to those called in to clean up the disaster---and their stories reveal the fear, anger, and uncertainty with which they still live. Comprised of interviews in monologue form, Voices from Chernobyl is a crucially important work, unforgettable in its emotional power and honesty.

I selected Voices from Chernobyl for my book club, which is reading award-winning books. The author, Svetlana Alexievich, was awarded the Nobel Prize last year for her body of work. This particular volume is a collection of first hand accounts by survivors of the Chernobyl disaster of 1986, when a nuclear reactor in Belarus, Russia blew up and spread radioactive particles throughout the region and the world.

Perhaps in my American over-exposed-to-media-violence brain, I was expecting more specific details about the physical affects of the event: gruesome deaths of those sent to clean up the site, deformed babies, etc. There is a little of that, very little, but most of the stories of these people describe their impressions of the event itself: the odd color of the fire, the chaos of evacuation, the fear and lies that surrounded the "Chernobylites". More importantly, these narratives reveal the inner-workings of the Soviet mindset, the trust of the people in their government, the distrust in the scientific community, the "we" versus the "I" mentality--concepts that are so alien to the American way of thinking. This book also exposes how this absolute loyalty to the communist party began to dissolve, greatly in part to the truth behind Chernobyl. It's a history among histories, the story of the beginning of an end.

While Voices from Chernobyl is not the easiest book to get through (many of the narratives are repetitive of each other), it is an important contemporary historical document, and reading it left me with a pit in my stomach and so many questions. I wanted to know more, so much more. And isn't that what good historical literature should do, compel us to seek out answers to the questions that are left unanswered?


Posted by Laurisa White Reyes at 6:23 AM