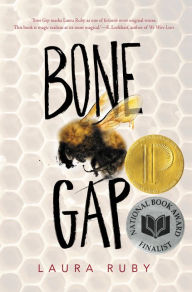 “With rich characters, captivating world building, and a stunning secret at its heart, BONE GAP is utterly bewitching.” - ALA Booklist (starred review)

Everyone knows Bone Gap is full of gaps.

So when young, beautiful Roza went missing, the people of Bone Gap weren’t surprised. But Finn knows what really happened to Roza. He knows she was kidnapped by a dangerous man whose face he cannot remember.

As we follow the stories of Finn, Roza, and the people of Bone Gap, acclaimed author Laura Ruby weaves a tale of the ways in which the face the world sees is never the sum of who we are.

Bewitching is a good word to describe Laura Ruby's Bone Gap. From the opening page, I couldn't put it down. The characters are mesmerizing and so real, they could honestly be living right next door. It wasn't until half way through the novel that I realized this is actually a fantasy novel, though that word doesn't quite do it justice. Magical. Mystical. Bone Gap is a nod to the myth of Orpheus and Eurydice, borrowing it's the underpinnings of its story from Orpheus's attempt to rescue his beloved from the Underworld. Of course, while Bone Gap cleverly weaves in elements from Virgil's myth, it also succeeds in creating a world and dual love story that is both unique and memorable.

If I have to complain about anything, it would be these two things. First, I disapprove of ANY sex between minors in books, especially books written for teens. I believe it is irresponsible of authors to mislead teenagers into thinking sex has no emotional or physical consequences, that it's all about love. This book has teen sex painted as an expression of heartfelt, sincere love with no consideration to the fact that in real life, pregnancy, disease, shame, and heartbreak are often the result.

Second, without giving anything away, the final conflict between the hero and the villain happened too fast, the rescue too easy. Not bad, but there could have been more. Much more.

Other than that, Bone Gap is a great read.